It’s been a tad blustery this week, with Storm Gareth gusting through the nation. So, if I were you, I’d settle down and enjoy this week’s News Views and Truths.

This week, some football was played. The particular tournament I am referring to is the Champions League, currently moving towards the quarter-final stage. Of particular interest to me was the match between Atletico Madrid (Spain) and Juventus (Italy). Madrid won the first round 2-0 and so, at home in Turin, Juventus needed to pull off something rather special to get through to the quarter-final.

And up steps Cristiano Ronaldo…

Whether or not he is the greatest footballer of all time is not the debate to be had here; he certainly is ‘one of the’. But the superlatives flowed across the global news feeds after he scored a hat-trick to send Juventus through with a 3-0 victory. Cue Phil Collins’ Against All Odds.

“What on earth are you going on about, Andrew? Football? This is not what I signed up for!”

I know, I know! This publication does not have a sports section. But bear with me…

Cristiano Ronaldo joined Juventus in the summer of 2018 for an eye-watering £99.2m, rising potentially to £112m if certain performance clauses are met. Now, that is a large amount of money. Again, whether the price tag is justified or not is irrelevant to this blog; it may be suggested that his display on Tuesday night justified the cost. It is absolutely of no doubt whatsoever that the increased merchandise sold on his arrival will go a large way in covering the initial outlay.

But did you know that Juventus has launched their own Corporate Bond? Now can you see the angle?

On the back of Ronaldo joining the club, Juventus announced the placement of €175m of non-convertible bonds with a 5-year maturity, the end date being 19 February 2024. Paying a fixed coupon of 3.375%, the offering was oversubscribed to the tune of €250m and indicates how clubs are viewing their future financing; like most businesses, asset-backed lending is commonplace and this could be viewed as an extension of that.

So, what could go wrong? Well, football results for starters. If a team is doing well, the security is more attractive to investors, with the reversal also true. Two weeks ago, Juventus went down 2-0 against Atletico Madrid and the price fell to €95.2. This week… 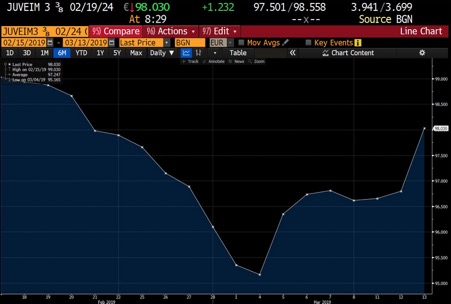 So, if your team were to launch a bond, would you buy? If Juventus is priced at €98/£84, what would your teams’ bond be worth? Would you ever consider it as part of your portfolio?

My answer is; No. £150 easy. Definitely Not. But that’s me. The above does not look like a bond – a c.5% fall and a c.3% rally in the space of 2 weeks is a tad rodeo-like for my constitution and as such, it’s a pass. But with Ronaldo in sparkling form and Real Madrid having been knocked out, if Juventus win the Champions League, holders would be well rewarded. Or not.
It’s a funny old game!

And, to finish, our usual playlist. Batten down those hatches and I shall see you all next week…