Congratulations! You have made it to the end of another wonderful week; give yourself a well-deserved pat on the back and enjoy this week’s News, Views and Truths.

This week’s big news (aside from the absolutely obvious Brexit/Trump cavalcade) is that Goldman Sachs have announced a new CEO. David Solomon will take over from the current boss, Lloyd Blankfein on 1st October after a twelve-year stint at the helm of the global mega bank.

Whereas the leadership within the bank has been dominated by investment traders, the appointment of Solomon is seen to be somewhat of a divergence as his background is of a banker, which offers a much broader experience base.

Solomon joined Goldman Sachs in 1990 with the last ten years heading up the investment banking division. Now all of this is pretty grey; I’m expecting you all to be wondering why is this of any interest?

“David’s always believed that having a wide range of outside interests leads to a balanced life and makes for a better career,” said Jake Siewert, a Goldman spokesman. “He has preached that regularly to younger employees in the firm and tries to lead by example.”

Mr. Solomon has also led a study about improving the quality of life for Goldman’s junior bankers that resulted in new curbs on the hours they could work on weekends.

He has recently released his first single, a remix of Fleetwood Mac’s “Don’t Stop” which you will be able to critique in this week’s end-of-blog playlist (although, you may want to skip it as it is, quite frankly, brutal). You can also view his Instagram page HERE.

Moving onto the markets, this week has pretty closely mirrored last week in terms of positive returns. The UK FTSE 100 and 250 are up 0.29% and 0.48% respectively and after a less that convincing performance last week, Europe is up 1.55%.

However, there is no respite for emerging markets with a loss of 0.87% for the week. This takes the performance of the MSCI emerging market index to -4.35% for the year, with the US S&P 500 up 10.28%. Anyone who knows me understands that I like a good chart and I’ve attached one below showing these two indices over 2018 – please note that the Trump steel tariffs, widely accepted as the reason behind the fall in emerging Market indices, was March. 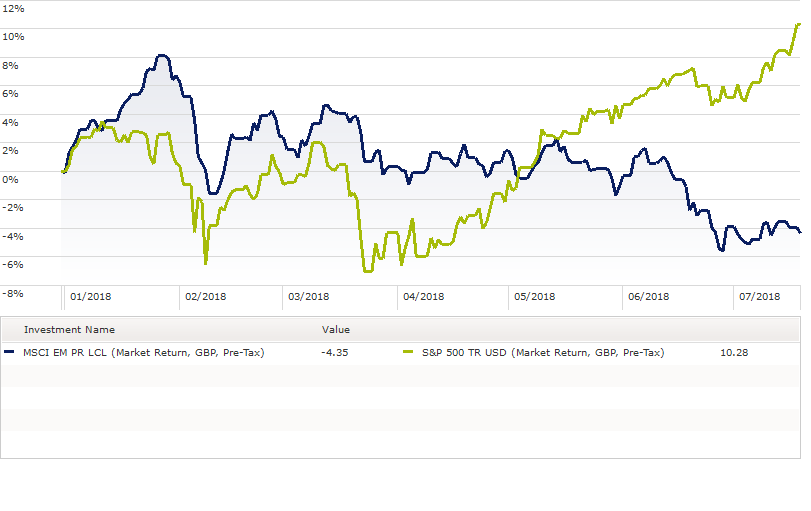 And to conclude as per usual, our weekly playlist. Take it steady, keep it real and I shall see you next week.