It feels like the weeks are flying by as it seems like only yesterday that I was penning last week’s edition.  Am I having far too much fun, or am I getting old?  Let’s go with both, shall we?  Either way, welcome to this week’s News, Views and Truths.

All eyes are east this weekend with the Rugby World Cup final being played in Yokohama, Japan.  Kicking off at 9am GMT, England and South Africa face off to get their hands on the Webb Ellis trophy and be crowned as the undisputed kings of the game.  I, like I am sure many others of you, will be tuned in, hoping to start the weekend off with a hugely positive bang.

And for me, it has been fascinating to watch the response that the tournament has had in the land of the rising sun.  It was estimated that 60 million Japanese watched the match between the home nation and Scotland, showing the potential that the region has to grow the sport.

The same could be said for the Japanese investment market.  The darling of the 1980s, the Japanese market was the place to be, with companies such as Sony becoming household names, fulfilling increasing consumer demand for technological advances such as the iconic Walkman.

However, like all good things in life (and certainly applicable to investment markets), they can come to an end and that was certainly applicable to the Japanese stock market.  An asset bubble, due to over-confidence and speculation, combined with an excessive monetary easing policy by the Bank of Japan, popped in 1990, with the Nikkei index falling 43% within the year.

To many market participants, the promised recovery has never arrived.  The economy has suffered from nearly 30 years of stagnation, wallowing between low inflation or outright deflation, subdued interest rates, elevated government debt and a decline in its global exports.

However, things may be about to change…

On 1st May, the new Reiwa imperial era commenced in Japan, as emperor Naruhito officially acceded to the throne.  While the direct impact of this on the economy, markets, or politics will be minimal, the psychological significance (Reiwa translates to “beautiful harmony”) is important. It represents a symbolic clean slate for Japan, drawing a line under the beleaguered 30‑year Heisei era. Given the positive economic and market changes already underway, Japan now has the potential to redefine itself and its role in the world.

While authorities have been slow to adopt pro-growth policies, the Shinzo Abe-led Liberal Democratic Party has successfully broken the long-held tradition of policy inertia on this front. Key to this is attempting to deal with the economy’s structural challenges, where a range of encouraging measures have been implemented, including lower corporate tax rates, enhanced corporate governance code and initiatives to encourage married women and foreign workers into the labour force.

Meanwhile, it is arguable that Japan’s economy today is not as heavily dependent on exports as it has been in the past. In recent years, improving domestic demand, including private consumption, has become an increasingly important driver of economic growth. The shifting dynamic means that Japan may not be as vulnerable to the threat of a global trade war than many believe and possibly, even less so than some other markets. As more investors put these macro developments into perspective and, in a similar situation to our own domestic equity market appreciate the many undervalued, quality companies available, there is the potential for an increase in capital inflows and a positive rerating of the Japanese market.

However, I cannot count the number of times a rebound in Japanese equities has flattered to deceive and so although we maintain an allocation to the Japanese market across all portfolios, we will naturally remain wary of potential false dawns.

But to put the scope of the recovery into perspective, I have charted the Nikkei against the FTSE 100.  That, ladies and gentlemen, could certainly be considered as potential. 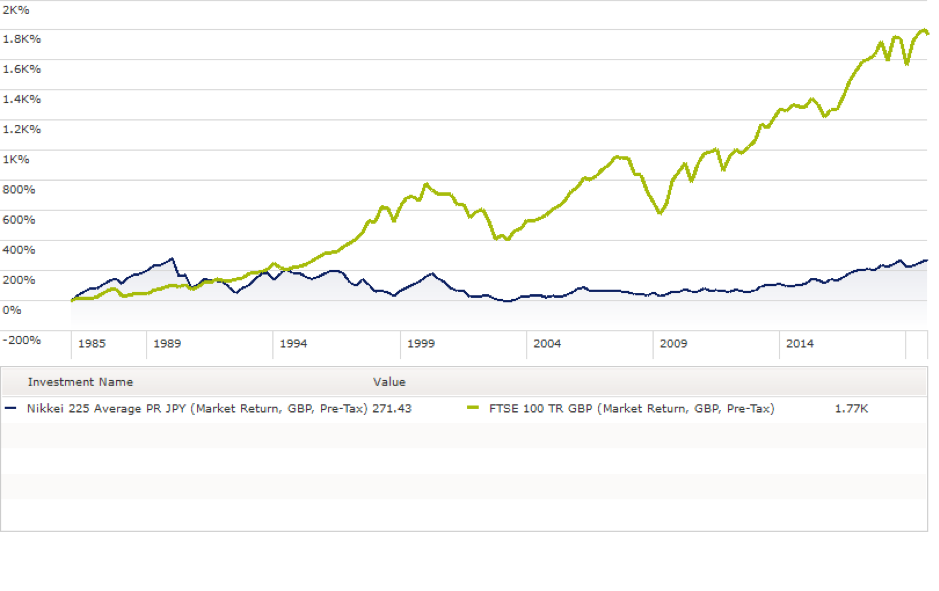 And to finish, our usual playlist.  Have a great weekend and I shall see you all next Friday!