Good afternoon everyone.  I hope you have had a fantastic & fulfilling week and are looking forward to the weekend with certain gusto.  And as night follows day, welcome to this week’s News, Views and Truths.

Whilst the media concerns itself with the political shenanigans on these shores, something big has been happening in the US of A, which may have missed your attention.

The reason for this positivity is due to reports of progress on an interim trade deal between the U.S. and China, something which has been written about in these pages for a number of months.  Bloomberg News yesterday reported China and the US will cancel planned tariffs on each other’s products in stages, with the first agreement due to be signed in the next few weeks. “The amount of tariff relief that’s coming will depend on what’s in that deal”, said Ministry of Commerce spokesman Gao Feng, according to the South China Morning Post.

And this relief could be felt around the world.  Many commentators believe that the European, Japanese and Chinese markets have “bottomed”, with green-shoots of positivity starting to emerge.

The European Central Bank have issued an update on economic and monetary developments that predicted sluggish but positive economic growth in the second half of 2019.  In US economic data, the Labour Department estimated that 211,000 Americans filed new unemployment claims in the last week, a one month low and below the 215,000 predicted by economists polled by MarketWatch.

Now, reading this in isolation, many would think that we are ending a pretty tough year for investors, with returns being difficult to generate.  Those casting their minds back to the closing weeks of 2018 would most likely agree.

However, you would be wrong. So, so wrong. 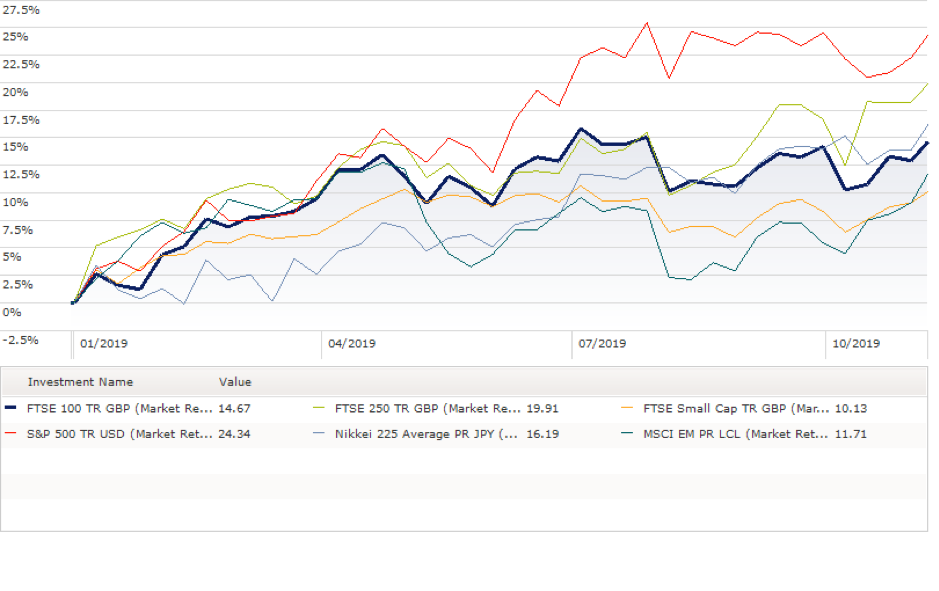 So, congratulations to all those investors who stuck with the project when markets were looking tricky; even more so to those who allocated more capital.  You have all been justly rewarded; well done you.

But don’t be complacent.  Last year’s doom and gloom predictions were way off the mark and although the geopolitical events currently unfolding seem to herald another leg-up in the market, keep your head while all others around you are losing theirs.

In the words of the great man, be fearful when others are greedy.

A client asked me the other day how are the portfolios positioned in terms of Brexit; I simply answered saying they weren’t, which is the truth.  However, they are positioned for what I called, Armageddon.  Emotional, yes.

During the summer, we increased the quality of our lower risk assets to the highest that we possibly could, with the view that if and when markets do take a turn south, this allocation should capture upside as the demand for non-equity assets rises.  Our equity allocation is undiminished; we maintain our exposure levels across all portfolios in order to maximise any market upside, but when it does go off and it will, we will be ready.

And to finish, our usual playlist.  Have a great weekend and see you all next week.