Hello, bonjour, bienvenue, wilkommen to this week’s News Views and Truths. With added European flair due to, if you hadn’t guessed, this weekend’s Eurovision song contest. Wave your flags, perhaps even indulge in some impromptu fondue and enjoy. Or at least attempt to.

It’s the 63rd Eurovison this year, hosted in Lisbon after Portugal won last year’s event through the efforts of Salvador Sobral with his song Amar Pelos Dois. I’m sure you all remember it. But let’s be honest, it’s never about the songs themselves; the voting is absolutely where it is at.

There are blocks. The Nordic block. The former Yugoslavian block and the former Soviet block. The Aegean block. However, this year we have a fully primed English speaking block of the UK, Ireland and Australian all getting through to the final.

Whilst many in the United Kingdom bemoan the usual 12-point swap between Greece and Cyprus, we often forget that the United Kingdom and Ireland have swapped votes a fair bit and Australia’s addition to the competition gives us a better power-base.

Of the Nordic block, only Iceland missed out on reaching the Eurovision Song Contest final, meaning the block vote will be shared amongst Norway, Sweden, Finland, Denmark and Estonia, who all regularly play each other’s music and have similar languages.

Of the former Yugoslavian block, Serbia and Slovenia are through but Montenegro, Croatia and Macedonia are out. Of the former Soviet block, Russia and Azerbaijan failed to qualify for the first time. Ukraine, Moldova and Lithuania and Estonia are the only former Soviet nations left. All of the Caucuses countries are out, with Azerbaijan, Armenia and Georgia eliminated in the semi-finals.

Moving on, this week’s big political and economic news was the decision by POTUS to pull the US out of the Joint Comprehensive Plan of Action (JCPOA), more commonly referred to as the Iran nuclear deal.

The deal itself was agreed in 2015, with the agreement that Iran would limit its nuclear activities, allowing inspectors into the country in return for the lifting of global economic sanctions. However, the move by the US has thrown the agreement under doubt, although the other signees of the deal (UK, France, Germany and China) have all agreed to continue on with the deal. The question that I am concerned with is what effect will this have on markets?

As Iran contains almost 10% of global oil reserves, the deal in its essence basically allowed the country to trade its oil, therefore the biggest impact will be on the oil price. And fundamentally, the oil majors and therefore their stock price will stand to benefit from a reduction in oil supply.

It has been estimated that a worst-case scenario – which would involve strict adherence and policing of sanctions – could see as much as 700,000 bbld (barrels/day) removed from the market while at the other end, with ambiguous US guidance we could see 200,000 bbld removed.

Although Trump would have ideally liked Europe to join him in re-imposing sanctions, the eventual effect is likely to be similar. Europe currently imports between 500-600,000 bbld of Iranian oil and it is expected this number will drop by approximately 60 per cent as Iranian oil can be easily substituted for other suppliers. Also, certain European companies such as Total and Eni may choose to stop importing Iranian oil altogether for fear of being precluded from the US market.
However, whatever the response might be, the impact is unlikely to be immediate as oil trades and contracts are completed on a futures basis, with existing contracts having between 90 to 180 days to terminate.

Bottom line, the implications for the market fundamentals are bullish. Brent crude has more than doubled from its lows in 2016 and as the global economic recovery demands more oil, and restriction in supply will continue to drive up the price. A quick scan of the TC CORE Investment Portfolios shows that 7.44% of the equity content across the range is invested within stocks that could benefit directly from a higher oil price. 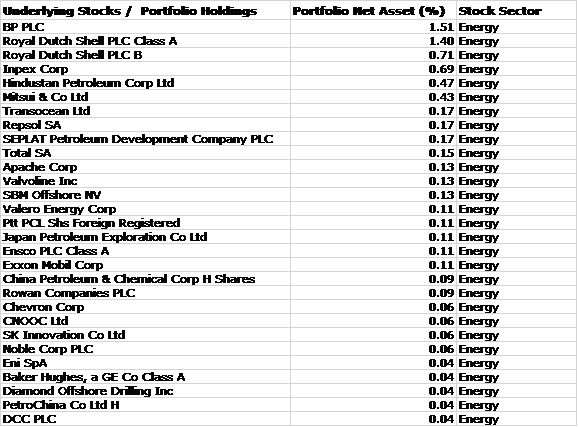 To finish and to revert back to the Eurovision theme (great segue), this week’s playlist is a melange of song contest classics. Enjoy the evening, enjoy your weekend and I will see you next Friday.