What a week! What a Friday! So much to write about! So let’s get on it; welcome to this week’s News, Views and Truths – The Italian Edition.

Firstly, Ciao to all my bellas. Literally the extent of my Italian.

Secondly, it has been quite the week in Italy, starting in the political sphere, then moving to the financial and ending back in the political. And then the fallout! So I shall attempt to be succinct.

Since the most recent Italian elections ended in a stalemate, with no clear and outright winner, the past weekend brought matter to a head when the constitutionally impartial Italian President, Sergio Mattarella, refused to sanction the appointment of Professor Paolo Savona to the position of Finance Minister.

The reason for this was Savona’s apparent anti-Euro stance and Mattarella used this to justify his decision based upon the fact that leaving the single currency had not been part of the debate leading up to the election on 4th March.

The decision has opened up nothing less than a constitutional crisis in Italy. Crowning a dramatic evening on Sunday, both the Five Star Movement and the far-right Brothers of Italy, previously allied with the League in the centre-right coalition, have called for the impeachment of the President. Only four times before has this possibility been seriously suggested in the history of the Italian Republic and it has never materialised, although on a couple of these occasions the President resigned despite him not being forced to do so through the procedure.

These events have had a massive effect on the market, in particular Italian bonds. Tuesday saw yield surge dramatically as the market read into the political turmoil that the chances of Italy leaving the EU had significantly increased; #Quitaly became a thing overnight.

After months of apparent complacency, markets were suddenly concerned about political instability in the Eurozone’s third-largest economy, with the jump in the yield on Italian two-year debt on Tuesday the largest on an intraday basis since Reuters records began in 1996. Just a month ago, Italy was borrowing for 2 years at a negative rate, or specifically -0.17%. The surge in its two-year borrowing costs to as high as 2.72% meant that investors have decided that they are more comfortable lending money to Portugal for 10 years at 2.15% than to Rome for a fifth of the amount of time. 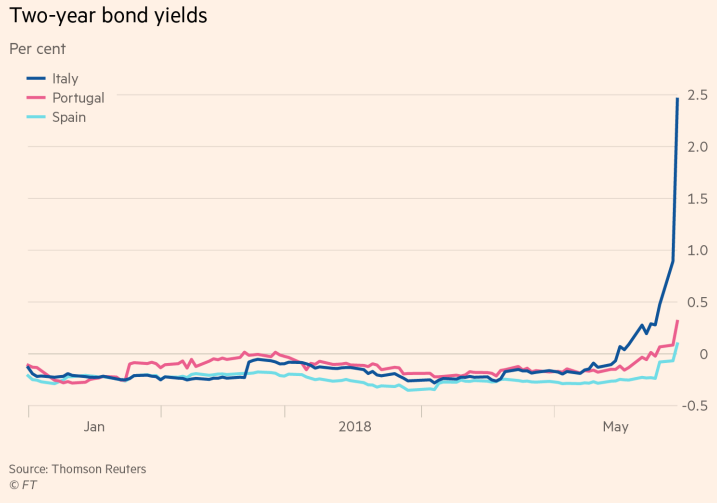 And if you were exposed to Italian debt, this did have an effect on you. Now I do not believe that many retail investors had direct exposure to an Italian debt fund or ETP. However, certain mainstream, big name fund managers got caught; one being Janus Henderson’s Bill Gross, manager of their Global Unconstrained Bond Fund.

Remember, this is fixed income we are talking about; many advisers refer to this as “low-risk”. This is the type of “low-risk” that can lose you 4% in a week. And it’s not just fixed income.

‘Quitaly’ has spread across European banks, many of which are invested into by UK investors. Understandably Italian banks have been hit hard, but of most concern has been the effct that the turmoil has had on Deutsche Bank as the market scrutinises its Italian exposure. That’s a 20% loss right there.

So to summarise and to reiterate previous blogs, volatility is back. But that brings some fantastic opportunities. Know what you own and know why you own it. Do not become complacent. You MOT and service your car; make sure your portfolios are serviced also. If you need any assistance, please do not hesitate to get in touch.

And in the spirit of this rather smashing weather and the Italian nature of this week’s blog, I’ve attempted to carry this over to playlist. Have a wonderful weekend and Ci vedremo tutti la prossima settimana.