Hasn’t time flown! It seems like just the other day I was penning my last blog and here I am, composing this week’s. I must be having fun! Anyway, plenty has been going on so welcome to this week’s News, Views and Truths.

This week I have been mostly dealing with Venezuela; an economic car crash in slow motion. Although investors must be comfortable with the potentially “bone-crushing” volatility exhibited by emerging market economies, the plight of Venezuela will be taught to economic students for years to come. That size of event deserves singular focus and that, ladies and gentlemen, is what I will be bringing to you this week.

So, where to start? Although the International Monetary Fund (IMF) describes Venezuela as having a “mixed economy”, in reality the petroleum sector dominates, accounting for over a third of the country’s Gross Domestic Product (GDP) and 80% of its exports. Positive spin – Venezuela has the cheapest petrol in the world; $0.015 per litre, on a fixed price that has been in effect since 1997.

In 2011, more than 60% of Venezuela’s monetary reserves were held in gold, the majority of which was held in London. However, that all changed when President Hugo Chavez decided to repatriate $11bn, calling this a “sovereign step” to protect the reserves from the volatility within global markets as a consequence of the 2008 global financial crisis.

What he actually did was spend this gold, enacting his socialist government’s policies, to the extent that in 2013 he was forced to add the reserves of state owned companies to those of the Venezuelan Central Bank to repay the international bond markets.

This cataclysmic mismanagement of the Venezuelan economy has seen a greater contraction of both national and per capita GDP than that of the US in the Great Depression of the 1930s, or of Russia, Cuba and Albania following the fall of communism. The major headline in recent years has been the increase of inflation – hyperinflation to be precise, and the effect that this has had on the population.

To put it into context, one US Dollar will get you 248,520 Venezuelan Bolivar. For those of you that equate foreign exchange rates via the cost of a chicken, that will be 14.6 million Bolivar’s at the chicken market in Caracas. The IMF projects that Venezuela’s inflation rate could exceed 1,000,000% this year. 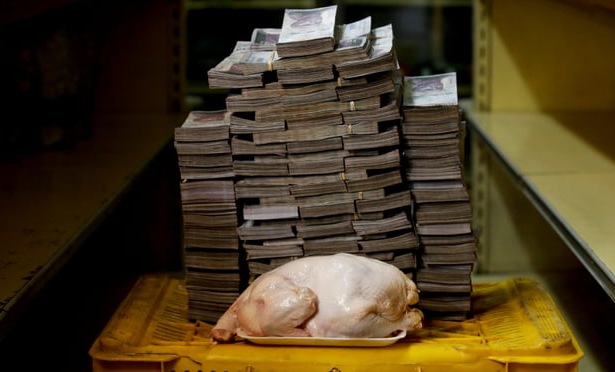 Since the death of Hugo Chavez, Nicolas Maduro has held the presidency and has continued on the same path of socialist agenda. Politics aside, this is an economic crisis of monumental magnitude which requires the same magnitude of solution. This week’s announcement was anything but.

So what has President Maduro done? Genuinely, this.

The problem is that the cryptocurrency does not trade and because of that, the Petro has been designated “scam status” by the crypto rating site ICOindex.com. As such, Venezuela’s own parliament has stated that the new currency is being used illegally to effectively mortgage the nation’s oil reserves.

Literally bottom of the barrel. Time will tell whether or not this will turn around the economic fortunes of Venezuela, but personally I am not holding my breath.
So how will this affect UK investors? In 2006, Morgan Stanley removed Venezuela as a constituent from their Emerging Market Index and as such, it is extremely unlikely that any direct exposure will be in effect. I can confirm that there is no Venezuelan exposure within Three Counties portfolios.

However, as stated at the beginning, emerging market investments do offer a higher risk profile than developed market investments, offset by the greater potential returns on offer. Your investment portfolio must tie intrinsically to both your financial goals, the risk your head tells you to take and the capacity for loss that your personal financial situation allows you to take. It’s not just a case of sticking a pin in the board and going with it.

And on that note, this week’s playlist attempts to leverage on the Economic Crisis theme. Hopefully you will enjoy and I shall see you all next week.