Here we go again – Friday. That shining beacon of hope at the end of the working week.  And quite the week too.  So as per usual, please allow me to furnish you with our own particular News, Views and Truths.

Dominating this week was the US midterm election, held every 4 years and placed in the middle of the president’s term of office.  The result of the election was somewhat even and absolutely expected – the Democratic party took control of the House of Representatives for the first time since 2010 and the Republican Party (that of Mr Trump) strengthened their control of the Senate.

So what effect could the result have on markets?  Interestingly, the assumed legislative gridlock that will no doubt ensue after the split in Congress as a result of the election is viewed as potentially positive for equity markets.  “Gridlock is good” is an oft-heard mantra when it comes to stocks; it comes from the notion that the likely inability of lawmakers and the president to accomplish much, means politicians won’t be able to do much harm nor to undo market-lifting measures already in place. The chart below from Bank of America Merrill Lynch helps explain why investors have faith in the concept.

As the chart shows, since 1928, stocks have produced an annual average return of 12% in years when a Republican president held office and control of Congress was split between Democrats and Republicans.  Furthermore, in the year following a midterm election that resulted in a Republican president and a split Congress, returns have averaged more than 20%, one of the highest returns of all the scenarios the analysts explored. 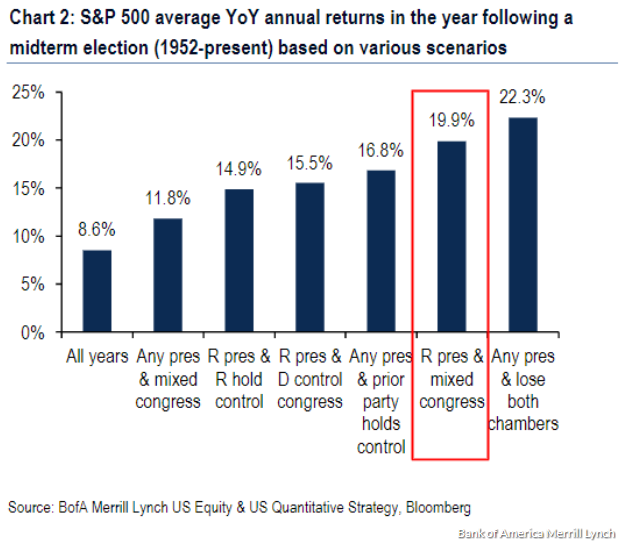 For stocks, the key positive from the 2016 Republican sweep that saw Trump win the White House and Republicans control both the House and Senate was the corporate tax cut enacted late last year, while the administration’s trade battles with China and other partners are now providing a headwind to returns.  Thus gridlock (nothing done, nothing undone) might not be a bad outcome and has historically been a good environment for stocks.

Last night also saw the US Federal Reserve Open Market Committee announce that they intend to leave interest rates unchanged, although their intention is to increase rates by 0.25% in December. Of greater significance however was the lack of reference to the increased volatility experienced by financial markets during October; whether this bodes well for the future we will have to see.

And to wrap up, a playlist by my partner in crime, Mr David Spencer Heppell; Compliance Officer of the good ship, Three Counties.  Partridge-esque one may say…  have a great weekend and I shall see you all next week.