If investors were unsure as to whether markets can perpetually sustain the upward trajectory of 2016 and 2017, 2018 confirmed that they cannot.

Out of 15 major asset classes, ranging from equities, bonds, commodities, gold and property, only one remained positive during 2018; cash.  Furthermore, taking the US S&P 500 index as a reference, this was the first negative annual performance since the Financial Crisis of 2008.

As Three Counties enters its 30th anniversary year, we draw upon this considerable investment experience to focus upon the year ahead to provide clarity and assurances for our clients.  And to do that, we must first look back.

There have been many suggestions as to why this global sell-off has occurred; geopolitical and economic alike.  However, it is widely confirmed as being the actions of the US Federal Reserve and their interest rate policy, which they have increased nine times in 2018.

During the financial crisis of 2008, the effects of Quantitative Easing (QE) and the subsequent falling interest rates were theorised, simply because an experiment of that magnitude had never before been attempted.  As a direct effect, the unwinding of the expansion – Quantitative Tightening (QT) – and the resulting effects were similarly theorised.

This move into the unknown created a ripple effect that spread globally as the market abhors uncertainty.  This fear resulted in indiscriminate selling, ignoring robust economic fundamentals and became an excuse to crystallise significant gains made over previous years.  So much so that the President of the US felt the need to attack the Federal Reserve, imploring them to resist increasing rates further.

We believe that the incessant rate hiking is over.  Although a further 3 rate rises are projected for 2019, it is unlikely that this will realise itself and 2019 should remain rather benign.

Firstly, one reason for interest rate rises is to combat the effect of inflation.  However, despite the theorised fallout of QE, inflation has never been a major concern and inflation adjusted interest rates are still comparatively low, well below levels that have previously predicted economic recessions. 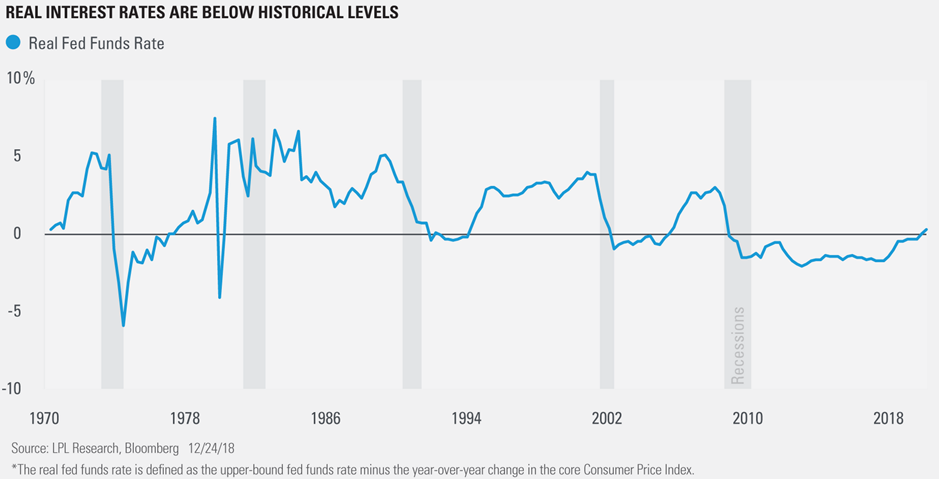 Secondly, the Federal Reserve often states that their decisions are “data dependant”, utilising quantitative information to justify their actions.  One of the most important data points is certainly the stock market and they have readjusted their interest rate policy in the previous 2 corrections post credit-crunch; 2011 and 2015-16.  It is expected that the same will occur during this market correction.

Thirdly, the US are out on a limb with their current monetary tightening regime.  They are the only major developed central bank with a positive real interest rate, including the UK which has an inflation adjusted rate of -1.7%.  Furthermore, the European Central Bank and the Bank of Japan are expected to maintain this course throughout 2019 and beyond.

This pause in rate hikes will allow the market to take a breath and hopefully consolidate and focus upon market fundamentals which remain strong.  Moving into 2019, we are unable to provide a crystal ball drive insight into what the outcome of the year will be.  What we can guarantee is that the media will be full of bad news and that the case to sell your investment will always seem the most scientific and academic way forward.

And it is absolutely the easiest way forward.  But also, as certainly the most sure-fire way to permanently lose wealth.

As I write, the FTSE 100 is down 12% from 1 year ago.  Yet still up 21% from 3 years ago.  And if the investment fundamentals of the companies within the index remain strong; if the historically low levels of unemployment and pace of growth within the UK outstripping the majority of developed economics, why would anyone believe that now is not an opportune time to invest?

And that message is even more extreme if you look overseas.  Valuations in Japan and Europe remain below historic averages and although there remains a continuing trade war between China and the US, emerging market economies remain priced around their 2015 lows.

What we want investors to focus upon is the longer term.  Even the deepest, darkest days in the market look like mere blips in hindsight. But as we have consistently advised our clients, the best days of market returns closely follow the worst and to miss one will guarantee missing the other.

And that is the way to permanently lose wealth.

So again, as Three Counties enters its 30th anniversary year, we continue to assist clients in navigating the trials and tribulations in markets.  Stay the course; do not let other influences distract you from your primary objective of achieving your financial goals.  Be guaranteed that Three Counties continues to have only your financial interests at heart, which we have demonstrated year after year.

Remember that the storm is a good opportunity for the pine and the cypress to show their strength and their stability.