2019 was a return to form for global markets.  Whereas 2018 was the first negative annual performance since the Global Financial Crisis of 2008, 2019 started and ended the year with a copious amount of positivity across the globe and investors were the beneficiary of this.

This was an effect of Central Bank actions, of which we outlined as our base case last year.  The fear of economic slowdown, as a direct result of policy error, hung like a pall across policy makers and as such, returned to a much more accommodative stance during the year.  And as such, the Draghi-like “whatever it takes” mantra provided risk-assets with the support needed to deliver a further leg-up in returns.

And it continues to be our view that the actions of Central Banks will continue to dictate the market narrative.  Our anticipation mirrors that of ING, the Dutch Global Bank, in that 2020 will be another year of supportive policy. 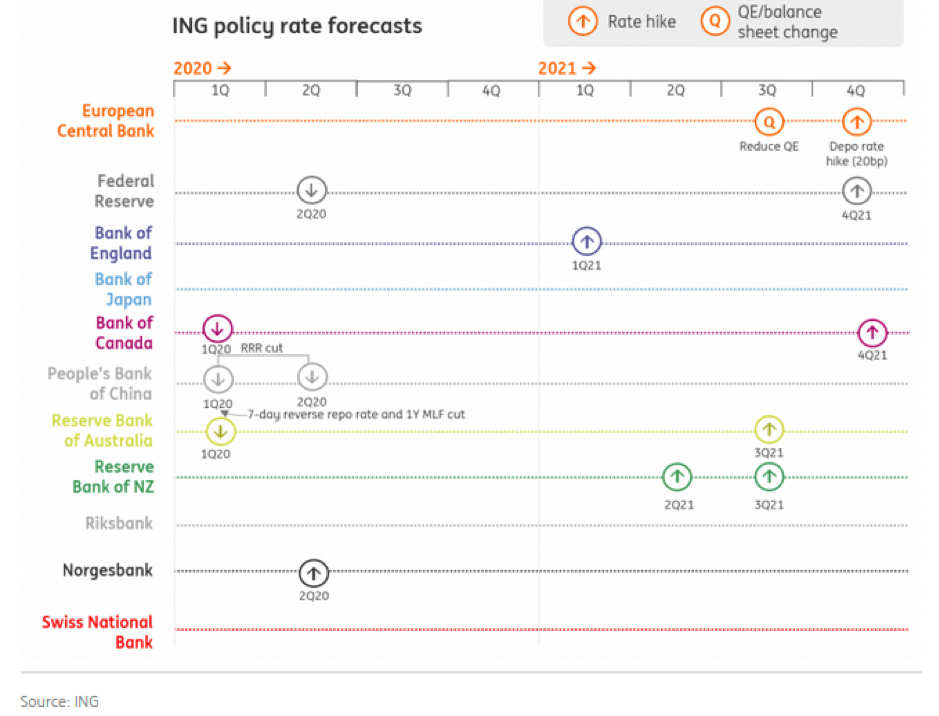 This continued easing of financial conditions should reduce the fear of a global recession and again, provide a positive backdrop for risk assets.  Furthermore, markets may continue to be buoyed on the apparent cessation of the US-China Trade War fears, along with government-supported stabilisation of the Chinese economy.

However, the forecast recovery is subdued compared to the rebound from the 2015-16 economic downturn and downside risks predominate.  The ‘phase one’ trade deal between the US and China is not yet agreed; an escalation in trade tensions between the US and EU still cannot be discounted and political uncertainty remains elevated. Fundamentally, the global economy remains characterised by low growth and high debt, rendering it vulnerable to adverse shocks.

Mediocre growth and subdued inflation will most likely keep Central Banks on hold, but should be sufficiently positive to keep default rates low, creating an environment in which investment grade credit typically delivers relatively attractive risk-adjusted returns. Ultra-low yields on core government debt, especially in Europe, renders investment-grade corporate credit the new ‘quasi-safe’ asset.  But with dispersion and idiosyncratic risk on the rise, active management will increase in importance.

Looking forward, in the absence of bold political action, investors are trapped in an environment of ‘QE-infinity’ and persistently low to mediocre growth. Yet the distortions from never-ending Central Bank liquidity and ultra-low interest rates are becoming systemic.  The imminent risk of recession has been removed for now, although this will most likely be a can-kicking exercise, evidenced by the rising numbers of zombie companies surviving on easy financing.

Looking closer to home, the post-Brexit evidence is that corporate sentiment has improved. 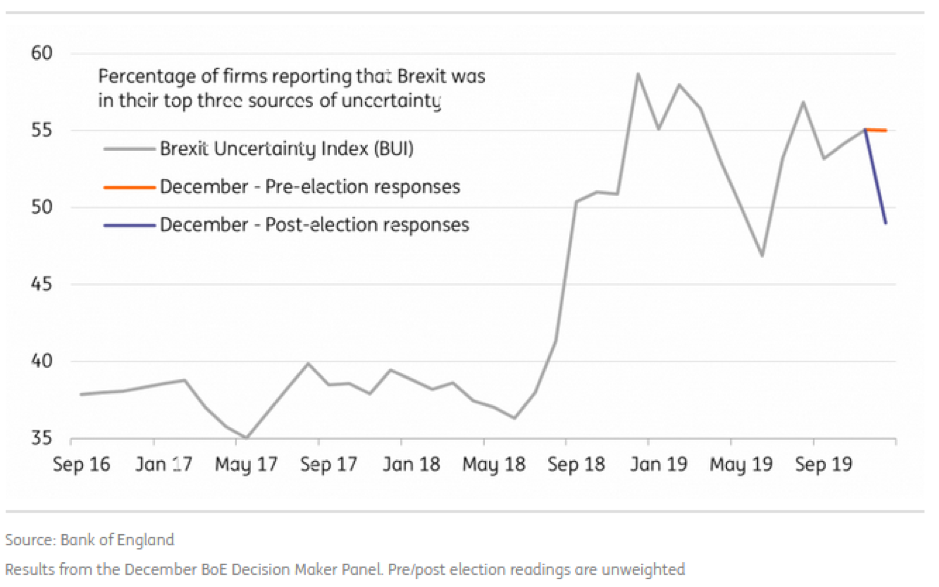 There is no consensus on the projected policy stance of the Bank of England (BoE) during 2020, although in comparison to the majority of Central Banks, Governor Mark Carney does retain scope for adjustment. In the lead-up to the December General Election, the chance of a rate cut built, particularly after some mildly dovish-sounding comments from Governor Mark Carney.

Two members of the committee voted to cut rates back in December and recent comments from Monetary Policy Committee voter, Silvana Tenreyro, suggested that the number could rise.  All of this comes amid signs that the jobs market is deteriorating; vacancy levels and job-to-job flows have fallen, while through the autumn the Purchasing Manager indices were pointing to non-replacement of staff.

However, it is still early days and the limited evidence available suggests sentiment has improved since December’s election, along with investment performance across all domestic indices.  The Brexit saga is far from over and there are plenty of question marks surrounding the UK government’s ambition to agree to a free-trade deal this year, which all leads to suggest that a rate cut can’t be completely ruled out. But for the time being, it is likely that the BoE will hold off on easing, barring a more significant deterioration in the state of the jobs market.

The beginning of this year is the mirror of 2019, yet our recommendation for 2020 does not alter from our previous year’s stance.  Stay the course; do not let other influences distract you from your primary objective of achieving your financial goals.  The best days of market returns closely follow the worst and to miss one will most likely miss the other.  This was never truer than 12 months ago.