Good afternoon everyone; I hope that you have had a good week and are looking forward to the weekend.  To that end, welcome to News, Views and Truths.

This week’s big news centred on Tesla, the American electric vehicle manufacturer and energy company.  Their share price has doubled since October 2019 after the company declared a quarterly profit.  Now, you may be one of those traditional investors who, you know, expect that successful companies should make a profit.

Oh, silly you; this is the new world where profits are not necessarily required to generate huge stock price increases.

On that announcement, the shares jumped 17% and have not stopped jumping. 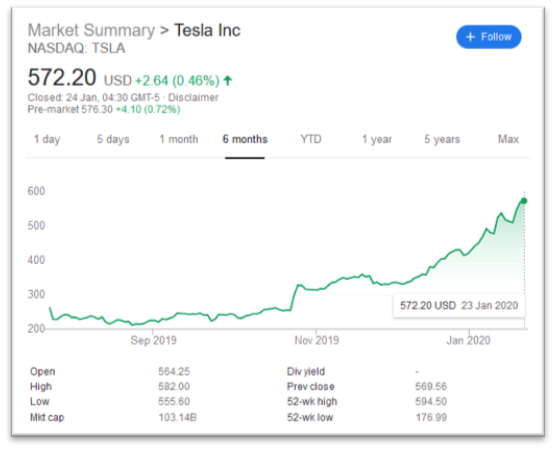 So, in today’s crazy world, you don’t need to make a profit or even make cars to become the world’s second largest car maker.

Yet investors continue to pile in.  And regular readers know that when people are greedy, be fearful.

Analysis from market researcher Bernstein has found that, after reviewing historical data, stocks that double over a 6-month period generate a forward 6-month return of just 2.6%.  They also note that as Tesla is considered as both a tech company and an automotive maker this can make analysis somewhat problematic.  Stock “doublings” are frequent in the former sector, yet very rare in the latter. Overall, Bernstein analysts view that the risks to Tesla are to the downside, with a $325 price target – 40% lower than the current price.

And this rapid price rise has resulted in broader market consternation, with the dreaded “bubble” word being thrown around.

Former presidential candidate Ralph Nader has entered the fray this week by questioning whether Tesla’s recent share price surge is warranted, with this gem of a tweet.

Now, the response was pretty much as expected.  You see, Twitter, or the residents of the social media platform, are in the main hugely pro-Tesla.   Among the criticisms was that Nader is a member of an older generation that doesn’t understand Tesla is a tech company that happens to make an electric vehicle, not a car company. Others noted Nader should like Tesla’s safety record and positive impact on the environment.

However, looking at this unemotionally, it is difficult to argue that Tesla looks like a classic bubble.  And a bubble that big will cause ripples…

How about we just focus on the fundamentals?  Like a company that makes a profit?  Wacky, I know.  It is certainly an approach that you will find throughout all the managers that Three Counties clients invest with.

And just before I sign off for the week, the most recent Purchasing Managers’ Index (PMI) results were released this morning.  As a point of note and taken directly from Investopedia.com:

The Purchasing Managers’ Index (PMI) is an index of the prevailing direction of economic trends in the manufacturing and service sectors. It consists of a diffusion index that summarizes whether market conditions, as viewed by purchasing managers, are expanding, staying the same, or contracting.

It is a good indicator of economic health.  This morning’s numbers all came in above expectation, effectively killing off the prospect of an imminent Bank of England rate cut.  And it was not just the UK; Germany and Japan both posted better than expected figures.

The Boris bounce keeps on giving!

So, to finish, our usual playlist.  Have a great weekend and I shall see you all next week.  Chin chin.