Well hello there. It’s an absolute delight to be back; how have you been? I’ve enjoyed a wonderful two week break with my equally wonderful family and am now back, batteries fully recharged and ready to go. So, kick back and enjoy this week’s News, Views and Truths.

Whether you know or not, the UK has been suffering from a Lime Cordial shortage for a month.  Although supplies are now returning (I picked up a bottle of Rose’s this morning from my local Sainsbury’s), the past month has seen a drought which has gone relatively unreported.

The reason of this was a fire at the Rose’s Lime Cordial factory which supplies both their own premium tipple and the supermarket own brands. Coca Cola, which owns it, confirmed that production had been temporarily suspended in a public apology to customers. This has caused some consternation over the summer as the nation’s “limeaholics” (genuinely I’ve just made that up, but it works and I’m sticking with it) have been writing stern letters to The Telegraph demanding their citrus hit.

But, as I’ve mentioned, it seems like it’s all good now, so no worries. Unlike Turkey…

At the beginning of the summer I wrote a blog on the issues facing Turkey and the impact these were having on the Lira; it can be seen HERE. Now at the time of writing, the Lira had devalued by 20% to around 6 Lira to the pound, a 20% fall in value over the previous 12 months. Foreign exchange markets were waiting to see what intervention the Turkish central bank would make, despite President Erdoğan’s insistence that interest rates were to be kept low.

Anecdotally, my parents were going on holiday to Turkey the following week; it’s a while since I saw my Dad look so happy at the bargain he was about to receive on the exchange rate.  And he was right.  He is never happier when he comes back with cash.  And they are going back again. #livingthedream

But in the intervening time Erdoğan has done nothing.  And although as a dictator, you may believe you are the master of all you survey, global markets will teach you otherwise.

Due to the double-digit inflation; due to the large and widening current account deficit. Due to Erdoğan’s limited and frankly unorthodox understanding of monetary policy and the ongoing diplomatic spats with both NATO and the US, Turkish equities fell by 27% over the weekend, hitting a 9 year low and 71% below their 2013 peak.

NERD ALERT: To put this into perspective, this level of downturn is known as a 6 Sigma Event – essentially six standard deviations from the mean.  In normal distributions therefore, an event of this nature should only occur every 4,039,906 years.  The year 4041924 to be precise.

This naturally did not just affect equities, but bonds issued by Turkey and most importantly, the Lira. 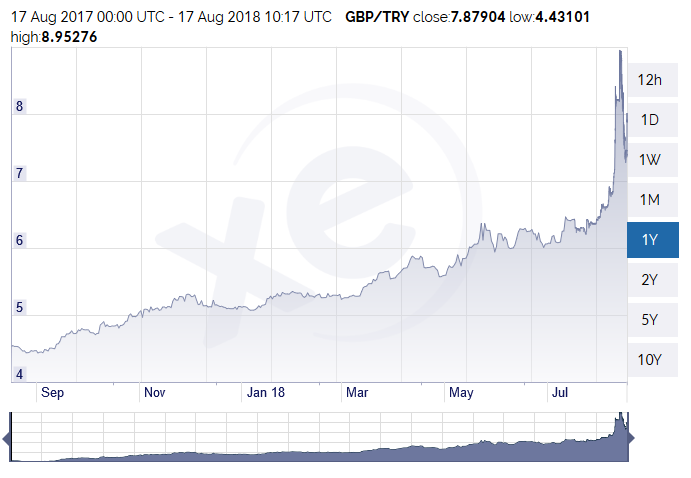 As the chart above shows, the “meltup” was massive. Gargantuan. Leviathanesque.

To the extent that on Monday I gave my Dad a call to explain that the Lira had blown out to 8.91 and that today was a once in a lifetime opportunity to pick some up.  He then gave me some twaddle about “being a pensioner” and “you bloody kids have spent all my money”. So he passed. 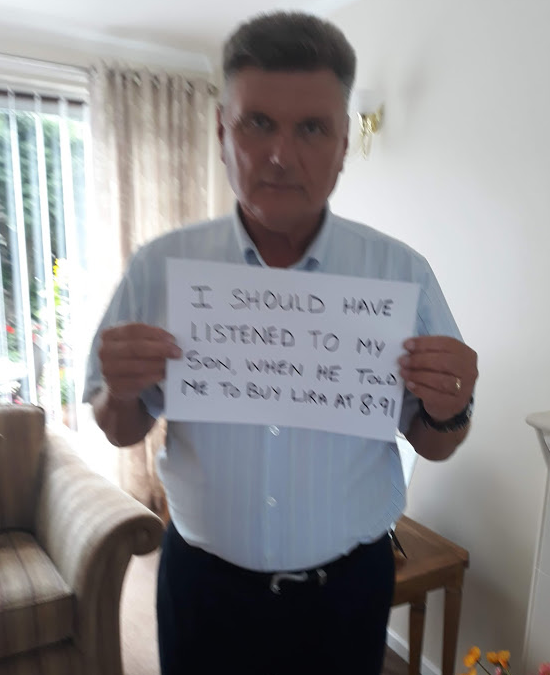 The world continues to watch how things play out. Equities have rebounded somewhat and the Lira stands at 7.83 today – still an absolute steal.  However, the impact across the Emerging Markets will be felt on an already under pressure asset allocation. The greater implication could be political in nature. Erdoğan only won the June 2018 election with 53% of the vote; he doesn’t have a significant majority of the people on-side. He cannot rule out unrest if he pushes the Turkish people too far and the business community have already made their disquiet known.

And to conclude this week’s blog, you have no doubt heard of the passing of Aretha Franklin, the First Lady of Soul. To celebrate her life, her work and the absolute beauty of her voice, this week’s playlist is dedicated to her. Stay safe, listen to your children and I will see you all next week.