Doesn’t time fly?  It certainly does from where I am sitting; perhaps I am enjoying myself too much?  Either way, welcome to the cusp of the weekend, which can only mean one thing.  News, Views and Truths.

Peaks and troughs.  Ups and downs. Zeniths and nadirs. This week has been unequivocally the latter.

Monday started brightly, yet sharply turned South due to our friend in the White House and his ongoing spat with China.  Mr Trump announced that talks between the two nations could extend beyond the 2020 Presidential election, held in November.

As a result, global markets dropped; Monday saw the FTSE 100 fall by 1.43% and a further 1.73% on Tuesday.  Safe haven assets, such as gold, rallied sharply on the equity falls, along with high quality sovereign debt.  This has added to the positive 2019 for “risk-off” assets, providing investors of all persuasions a positive 2019 year to date.

Yet, one geopolitical spat is never enough, it seems, for The Don.  After poo-pooing any potential near-term resolution with China, POTUS turned his ire on Brazil and Argentina, as is his want.

In another example of his infamous tweets, Mr Trump thought it would be a smashing idea to threaten the two South American nations with tariffs on their steel exports, stating that this would result in “massive devaluation of their currencies”.

And then he started on the French.

Assuming that a bit of pre-season boredom has set in for the Orange Man, the White House threatened duties on French goods because of a digital services tax that could harm U.S. tech companies, to which France and the European Union said they are ready to retaliate, if those threats were to materialise.

And this was all before the NATO meeting this week.

The markets have failed to recover for the rest of the week, although they have not exacerbated any further sell-offs.  Year to date, however, 2019 has been a belter; never lose focus of the longer term, especially when all others are losing theirs. 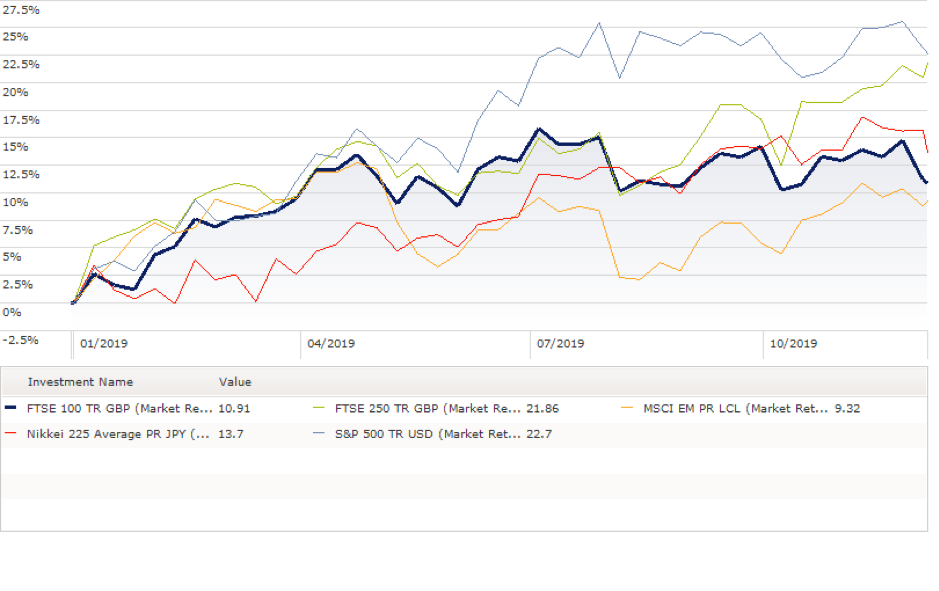 And to finish, our usual playlist.  Usual for this time of year, that is.  Have a great weekend and I shall see you all next week.