‘I don’t care if Monday’s blue, Tuesday’s grey and Wednesday too. Thursday, I don’t care about you, it’s Friday I’m in love with.’

Welcome to this week’s News, Views and Truths.

This week’s biggest news is that Amazon has become the second company to be valued by Wall Street at $1tn, a matter of weeks after Apple first reached the milestone. On Tuesday, the online retailer crossed the rubicon briefly as the shares hit a price of $2,050, albeit falling back to a paltry valuation of $995bn.

Heady days from Amazon’s Initial Public Offering (IPO) in 1997 at $18 per share. The company that started life selling books and CDs online has morphed into a behemoth that now makes much of its money from hosting websites such as Airbnb, Netflix and Unilever. Amazon Web Services is currently the frontrunner for a $10bn contract to provide cloud computing for the US Department of Defence.

I’m sure many people have traded in and out of the company during those first few days of launch; indeed, Amazon are only one of a handful of internet companies that survived the 2000 Dot-Com bubble. Certainly, at that time it is very unlikely that many saw the potential x1000 increase in the company’s share price.

And that is because investing is hard. It is not supposed to be easy because it is not.

On April 1st 1976, Steve Jobs, Steve Wozniak and Ronald Wayne founded Apple. Wayne drew the first Apple logo, wrote the three men’s original partnership agreement and wrote the Apple 1 manual. Jobs and Wozniak each owned 45% and Wayne 10%. Two weeks later, he sold his 10% interest for $800. This 10% interest would be worth $90 billion today. He was closer than anyone to the visionaries of Apple, and he still sold.

It doesn’t matter how close you are to a story. Investing is hard.

But when the technology bubble burst in 2001, Softbank lost 99% of its value from its peak. Masayoshi Son himself lost more money than any other person in history, his net worth declined from $76 billion to $1 billion in three years.

However, in 1999, Masayoshi Son and Softbank made a $20 million investment in the Chinese online retailer, Alibaba. This investment is considered today to be the most successful investment ever in the history of mankind. Softbank’s 30% ownership position is worth $130 billion, or a 6500x return.

Softbank’s ownership interest in Alibaba is worth more than the market cap of Softbank. Masayoshi Son made over a hundred investments, almost went bankrupt, but a few investments saved him.

Regular readers will know that previous editions of this blog have covered the trade tariffs applied by Donald Trump, affecting trade and goods, particularly commodities such as steel. Listening to the media and heeding their words, investors who are so inclined, may have betted against the US coming out of this period economically damaged.

It was predicted by many that a programme of protectionism would not only damage the US economy, but that the economic might of China would simply dismiss the effects using the levers that a one-party state has. Basing your investment decisions upon this would have resulted in the following performance OVER THE LAST 12 WEEKS. 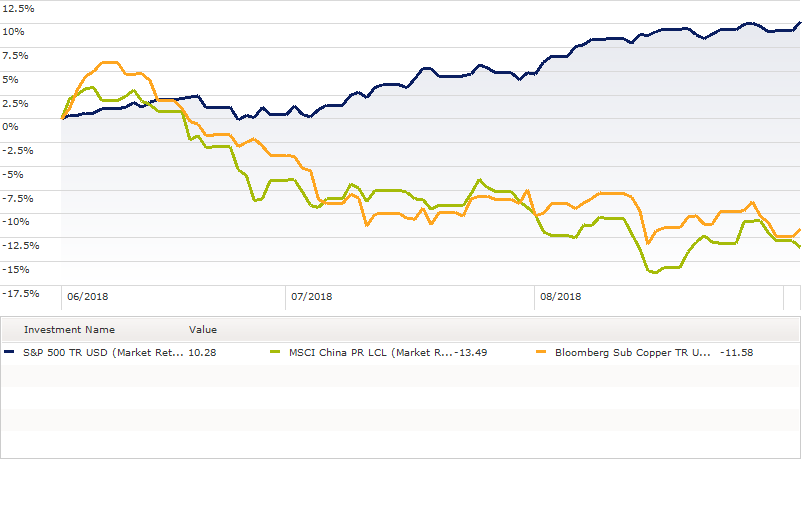 Investment growth should never, ever be taken for granted. As I continually remind myself, assume and you make an ass out of u and me. Make sure you know what you are invested in and speak to your adviser. If you are not a client of Three Counties (my goodness why are you damaging your finances? Quick, pick up that phone and call 0191 2303034 and grab yourself some Adviser Alpha!), we would be delighted to assist you.

And now to this week’s playlist. I wish you all a fantastic weekend and hopefully I shall see you all next week.