And what a fantastic afternoon it is.  Welcome to this week’s News, Views and Truths.

I have a rule; well to be honest I have a number of rules.  But with specific reference to this blog, I adhere to one rule – never write about religion or politics.

But hey, rules are meant to be broken, right?

And to be honest, many of you would be disappointed if I did not give commentary on today’s events – with a market focus, obviously.  So, here goes.

We have certainty and the market loves certainty.  Due to the decisive Conservative majority, we now know that the Brexit Withdrawal Bill will be triggered on 31st January 2020 and the UK will commence leaving the European Union.

At 10pm last night, once the result of the exit poll was made known, indicating a Conservative majority, Sterling jumped against the US Dollar to around $1.35.  Although an amount of profit has been taken after the initial surge, this new floor is now baked, with Richard Buxton, Head of UK Equities at Merian Global Investors stating, “It would not be too outlandish to suggest that $1.40 could soon be within reach.”  And remember, that would still be below the $1.50 mark struck on the EU referendum day.

Yet the bigger test was to come at the market open.  Initially cautious, most likely due to the strengthening of sterling, the FTSE 100 opened tentatively, up 27 points.  However, once the market had a brief amount of time to acclimatise itself to this new scenario, the index surged; at the time of writing we are looking at a 1.84% gain, with the banks and house builders leading the way.  Lloyds is up 6.1%, Barclays 7.68% and RBS 10.37%.  Of the house builders, Taylor Wimpey is up 15.16%, Barratt up 12.67% and Persimmons up 11.06%.

And it’s not just the large cap.  The FTSE 250 is up 4.32%, hitting record highs, with every sector up.  Again, house builders Bellway (11.06%) and Crest Nicholson (9.61%) are pushing the index up, although Utilities, Consumer Cyclicals and Miners are making the biggest gains.

Day 1 looks good.  There is the possibility that we could be now looking at the potential catalyst for a further surge in domestic equities.  Karen Ward, chief market strategist at JP Morgan Asset Management has said, “Appetite for UK assets should improve materially in the coming days and weeks. For investors, perhaps the most significant news is that Jeremy Corbyn, the far-left leader of the Labour Party, will stand down. Sterling has already bounced and could go higher if the Bank of England remove their dovish rhetoric, as we suspect.”

As I have written in recent weeks, the differential between returns delivered by domestic stocks and their international counterparts is stark, as illustrated by the chart below. 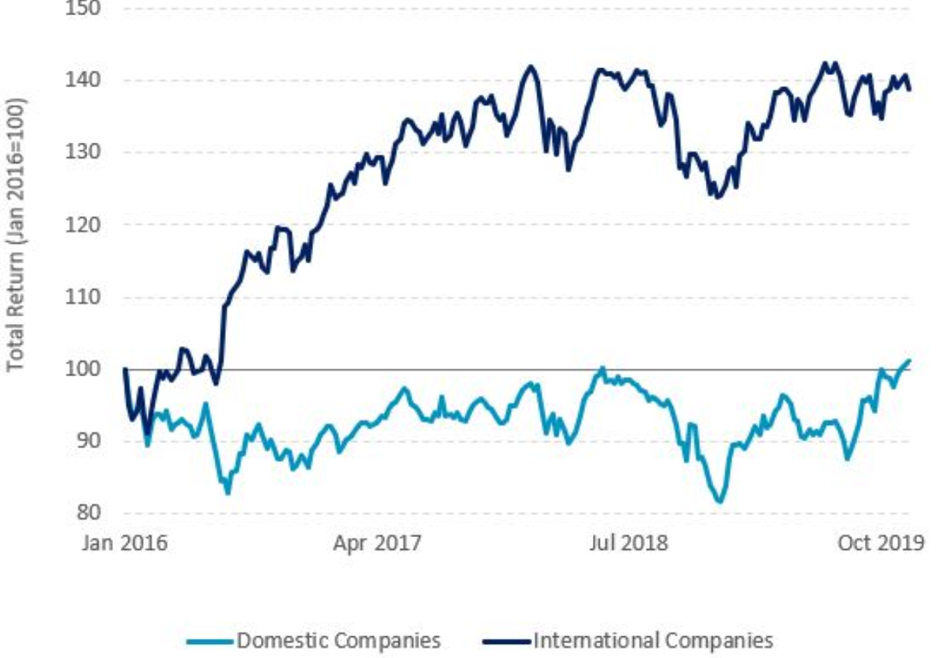 There certainly were some very large moves in domestic UK companies at the market open, with the underperformance against international counterparts in the region of 40% since 2016.  If this does close, then that could be very positive for portfolio returns.

So, there you go.  If you have exposure to UK equities, today’s result has been very positive.  Today.  What will happen in the future, however, is up for grabs.

And to finish, a playlist.  Enjoy your weekend and I shall see you all next week.

In this glorious new world!